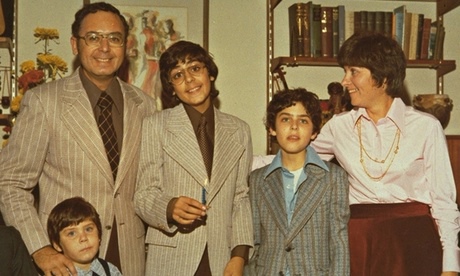 The Friedmans are a typical upper middle class family in New York. Arthur and Elaine are the parents. They have three sons, David, Seth, and Jesse. In the late 80's, Arthur and Jesse are arrested on child pornography/molestation charges. The documentary examines the case against them and raises questions on whether or not they were actually guilty of all of the things they were accused.

I've been watching a lot of true crime documentaries lately. This was a very unique experience as I'm not sure I've ever wtf'd so hard while listening to a family. The amount of what has to be denial is astounding.

The documentary is a bit bias, and that's fine. It happens. Andrew Jarecki (who later went on to direct HBO's documentary The Jinx) seemingly wants to clear Jesse Friedman's name. So as I listened to his side, I tried to keep an open mind. They made a few points about the abuse being "outlandish" by those standards, but the sons, mostly David and Jesse since Seth didn't participate don't seem to take into account the MOUNTAIN of kiddie porn Arthur Friedman had and they also seem to shrug off the fact that he admitted to being a pedophile like it wasn't a big deal. Instead, they blame their mother for not being "affectionate" enough towards him. The story is told through several family videos - because this family loved to tape their drama - and it's always the sons yelling at their mother. (or "mommy" as these grown men keep referring to her as.)

I went back to Drew's Four Ways a Best Picture round table that I participated in this summer to see if anyone mentioned this documentary, as it was nominated but lost to The Fog of War. No mentions, but I wish this is what we could've talked about. It's very thought provoking. I'm not sure if family dysfunction has ever been captured in this way before.

Recommended: Yes (and you can watch it on Youtube)

Memorable Quote: "It was in plain sight." - Det. Frances Galasso