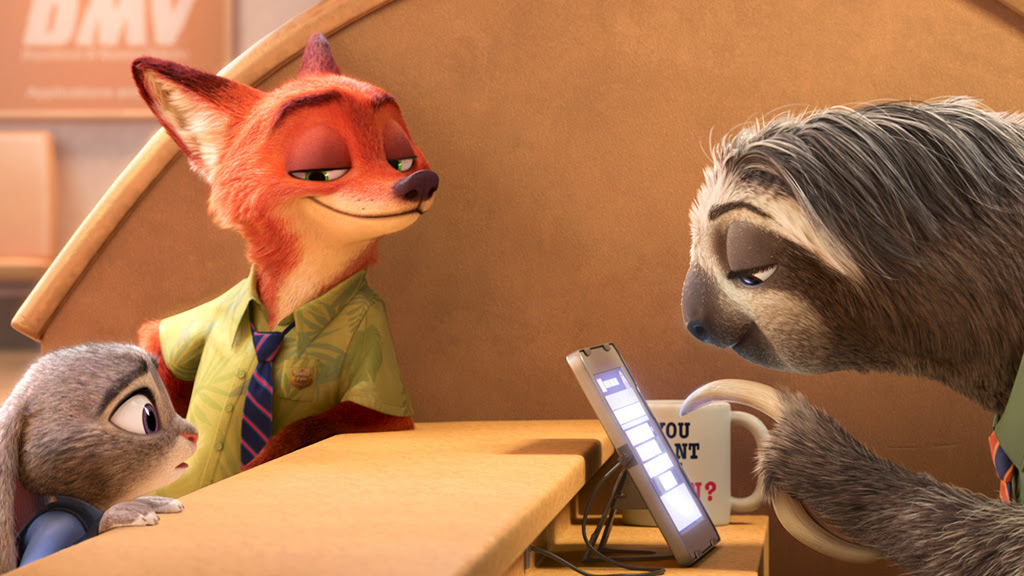 I wasn't going to review Zootopia. I usually don't type up posts about the movies I tag my child to unless they have a strong impact on me one way or another. This one, I wasn't expecting much. I didn't even know what it was about as the only preview I had ever seen was the sloth one. I haven't been this pleasantly surprised while watching an animated movie since I saw How to Train Your Dragon.

Judy (Ginnifer Goodwin) is a small town rabbit who dreams of becoming the first bunny cop in the big city of Zootopia. She has these small town ideals where she thinks everyone gets along in the big city and she's really going to make a difference. She immediately gets put on parking duty and gets conned by a fox named Nick. (Jason Bateman) Fox represent a species that's almost always shit on in Zootopia. They're all called sneaky and untrustworthy. Judy volunteers herself to help solve a missing animals case, and realizes that Nick can help. She has to put her prejudices aside.

This film makes so many profound statements about racism and classism. It works in way that adult movies like Crash somewhat failed at doing. It also manages to feel unpretentious when it's up on its soap box. I felt that both myself, my husband, and our son connected with this film on a level where we just couldn't with Inside Out (The other recent kids movie to pull in adult themes) Instead of my son feeling so sad like he did in Inside Out, he actually asked questions. "Why are they mean to him?" "Why do they think he's different?" He might be too young to understand the heavy undertones this film has, but he understands enough to know it's not fair to treat other people badly because they're different.

The film also has some of the dumbest gags ever, but they're hilarious. There's also an amazing Frozen jab and a great Breaking Bad reference that I couldn't help but love. And of course, I love crime stories, so being centered around one was a smart move. It drags a bit towards the end, but Zootopia is such an important film and I'm so glad it blew my expectations away.

Memorable Quote: "I bet one of them is going to howl." - Nick (Jason Bateman)