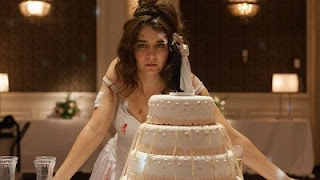 I'm sure I've used that title for my review before, but it applies so well to this series of vignettes about how people handle stressful situations.

Pasternek - Passengers on a plane realize they all know Pasternek and question why they're all there.

The Rats - A waitress comes face to face with a man that ruined her family's life, and her cook suggests they put rat poison in his food.

Road to Hell - The most intense case of road rage I've ever seen.

Bombita - A demolition engineer is really pissed off about getting a parking ticket.

The Deal - A man in a rich family kills a pregnant woman in a hit and run, and his parents attempt to pay their gardener to admit to the crime.

Til Death Do Us Part - A bride finds out on her wedding day that her husband has been cheating on her.

Do you ever laugh at completely inappropriate things? That's the feeling I had during this film. Everything is so tragic but a few times you can't help but laugh at how absurd it is. It's probably one of the best dark comedies I've ever seen. Of course some of the shorts aren't as strong as the others. The Deal is at the bottom because it reminded me so much of that Affluenza douche that was in the news a few years back. Til Death Do Us Part, the most expansive of the shorts is my favorite because the bride (Erica Rivas) is a gem herself.

The film doesn't have many downsides, if anything some of the shorts, like The Rats end far too quickly, but it leaves us a lot to think about in a good way.

Memorable Quote: "Sometimes I have to hurt a young man's self esteem to save the ears of millions." - Salgado (Darío Grandinetti)
Indie Gems