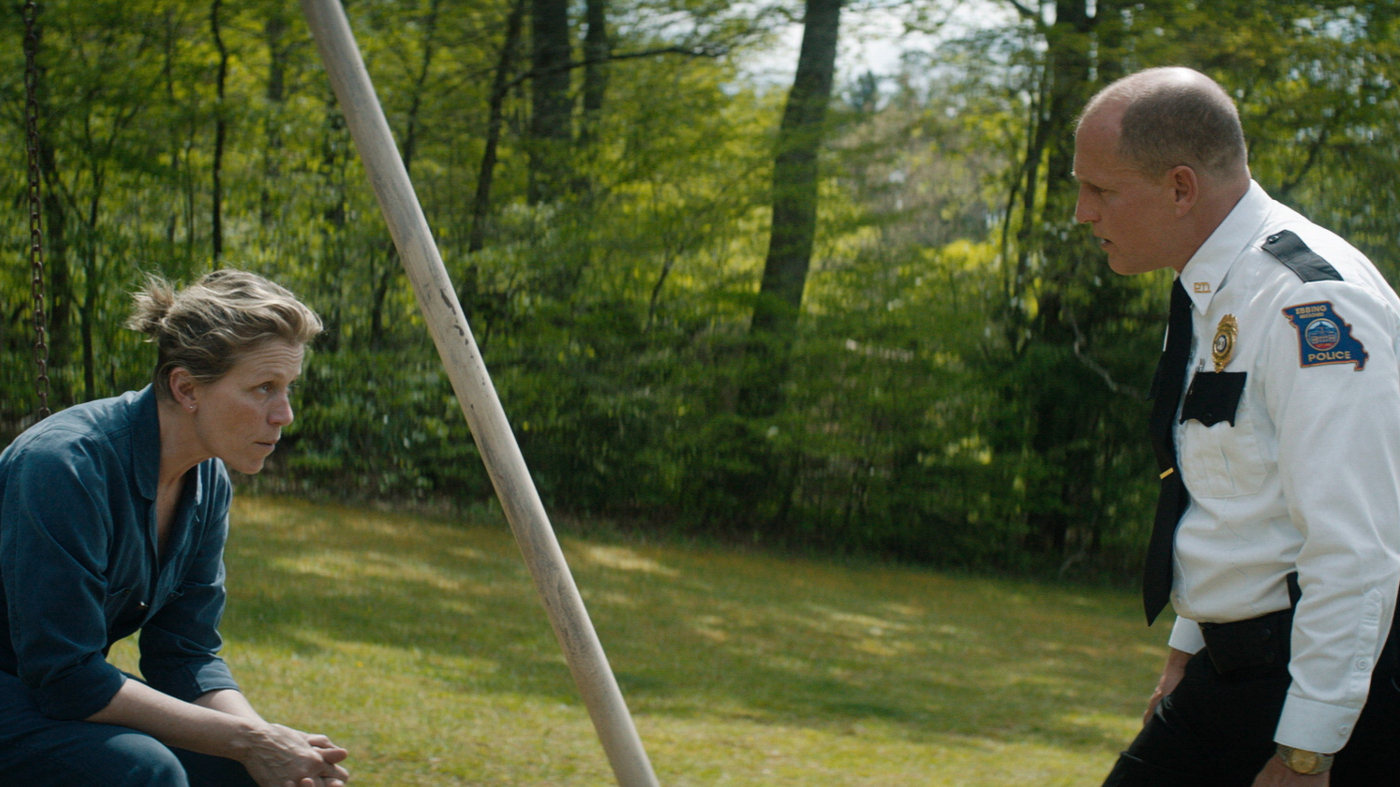 Behold the field where Mildred Hayes (Frances McDormand) grows her fucks. Lay thine eyes upon it and see that it is barren. So barren that after months of hearing nothing about her teenager daughter's rape/murder case she puts up three billboards in that field aimed at the town's Sheriff (Woody Harrelson) for not trying hard enough to solve the crime. While he feels bad, he's dying of cancer and doesn't have much time left. Once his racist lose canon deputy Dixon (Sam Rockwell) gets involved, things escalate.

I love director Martin McDonagh's work. In Bruges is one of my all time favorite films so my expectations for this were high. They were met on every level. McDoagh's signature inappropriate humor is there. The fast quips and the lines that truly make you say "what the fuck?" Underneath that, this film has a ton of heart.

It presents several characters who both likable and unlikable at the same time. Even our lead Mildred stoops to some pretty low levels but minus a few people you find a way to sympathize with nearly everybody at one point or another. Even after you've previously written them off. That is perfect writing. These characters have layers.

McDormand is outstanding. I loved her DGAF attitude, but at the same time you saw her tenderness and how she was hurting. Harrelson is hilarious yet heartbreaking at the same time. He comes off as a bit abrasive but you can see deep down how much he cares. Rockwell continues to amaze. Dixon's emotions are all over the place, yet Rockwell still manages to drum up a bit of sympathy in all of his awfulness.

The supporting cast don't get as much to do, but work well in their roles. Peter Dinklage pops up a few times as Mildred's friend. Abbie Cornish is Sheriff Willoughby's randomly Australian wife. (Yes, I know anyone can live wherever they want, I just found it a bit curious she kept her natural accent) While she didn't get much to do she has a really strong scene with McDormand. Then there's Lucas Hedges as Mildred's depressed son. Caleb Landry Jones as the billboard owner who helps Mildred out. John Hawkes as her ex husband. Clarke Peters as another police office. I'm rambling but I can't rave enough about this cast.

Going in, I saw a few people on Twitter hated the ending, but I thought it was perfect. It fit so well with the rest of the film.

Memorable Quote: "I think that midget wants to get in my pants." - Mildred (Frances McDormand)