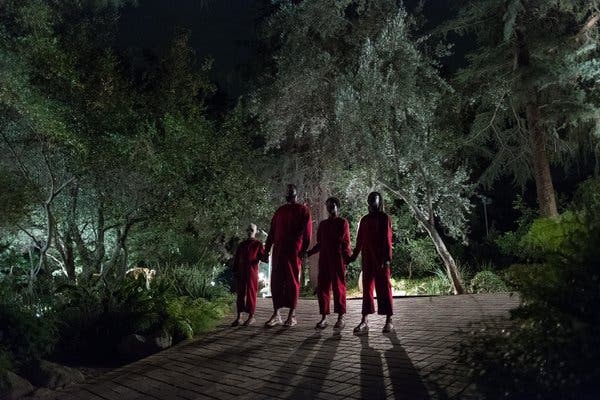 Adelaide, (Lupita Nyong'o) her husband Gabe, (Winston Duke) and their two children Zora (Shahadi Wright Joseph) and Jason (Evan Alex) are off to their summer home. After Adelaide reluctantly gets dragged to the beach and asks Gabe if they can leave in the morning, they start being terrorized by people who show up to their home and look exactly like them.

You've probably already read to go into Us knowing as little as possible and I agree with that. The less the better, even though the trailer truly does spoil a lot of things. I had good time watching this. It was tense, yet still had moments of amazingly subtle humor. As someone who frequently jokes when I feel uncomfortable, I liked that Zora and Gabe did that occasionally. It makes this family feel like real people and not just characters.

The actors are all fantastic, especially Nyong'o who carries the majority of the film. She had good chemistry with Duke. She was the serious parent and he the goofy one, I thought they played off each other well. The supporting cast of Elisabeth Moss and Tim Heidecker aren't in it for very long, but I liked what they did as well.)

But there's one thing that needs to be said about Us. While it's very enjoyable throughout, and it's something I'd certainly watch again. It's one of those films where the more you think about it, the more the story kind of falls apart.  I'm going to put a few questions I had in white text below for those who have seen the movie to let me know what you think too. If you are one of those people who don't take movies home with you, I don't think this will be an issue, but if you like to sit with them for a while you may find yourself picking this story apart. Still, I don't think you should avoid watching this for that reason. It's a very good film with an amazing cast, an interesting concept, beautiful little details, and an amazing score.

Spoilers! Highlight over the white text below to read
1) Why didn't the real Adelaide try to escape the tethered since she was aware of the outside world? Was Red only allowed to get to the entrance because her doppleganger was there? Is that why Adelaide never tries to leave?
2) Was there only on facility? If they're trying to form a chain across the world, there had to be more, right? If so, how were they communicating to know Red's plan?
3) Were they only cloning people at the fair? Or are we to deduce that EVERYONE is cloned?
4) How did they survive after it was abandoned?