Review: Those Who Wish Me Dead 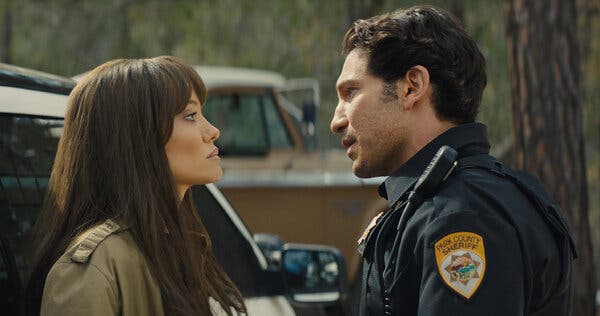 Hannah (Angelina Jolie) is a fire jumper in Montana who has been regulated to tower duty after a tragic turn on the job. Then there's Connor (Finn Little) a young boy whose father is a forensic accountant who discovered something big done by some very bad people. (Adian Gilen and Nicholas Hoult) He and Hannah cross paths and must find their way out of the wilderness safely.

Taylor Sheridan is a writer/director who always has my attention so when I saw this film was coming to HBO Max, I knew I'd be watching. I'm glad that's the platform it was available to me on, because while I wouldn't rush out to see this in theaters, it was a perfectly fine at home watch.

I feel like it's been ages since I've seen Angelina Jolie in anything, and it was nice watching her again. Hannah carries a lot of baggage and Jolie portrays her well. Finn Little also holds his own. Connor is traumatized and Little plays him in a way that's always believable and never over the top. I think he has a bright future. My favorite character was Allison (Medina Senghore) a pregnant woman who runs a survival school and instead of just being a one off victim, she gets shit done. I would watch an entire film on her.

There is a lot of vagueness in the script, but I was never bored while watching this. It was perfectly paced, and I can accept that this doesn't have the same fine tuning that some of Sheridan's other films haven't. For a movie to watch at home, this was fine.