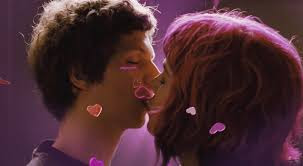 Scott Pilgrim (Michael Cera) still hasn't gotten over his ex, he starts dating a high school girl as a rebound and tries to make it big with his band. Then he meets Ramona Flowers (Mary Elizabeth Winstead) things change. He becomes determined to date Ramona, but first he has to defeat her seven evil exes.
This is definitely a film for people with a certain taste. If you're not a gamer or a comic book reader, you might not enjoy it as much as others. I dug Scoot Pilgrim, I loved how over the top it was. The Nintendo and Zelda music at the beginning was a nice treat, the special effects were awesome. The ensemble cast was wonderful. Kieren Culkin has some of the best lines in the film as Scott's room mate. Alison Pill was great as the moody drummer. There were plenty of fun cameos throughout. However in spite of all these wonderful things, there was one annoyance I just couldn't get over: Michael Cera.
When Arrested Devlopment was on, I enjoyed Michael Cera, when Superbad came out, I loved it too. Sure the parts were similar, but they were both so funny that it didn't matter. Now Cera plays the same character over, and over, and over again. I hated watching him in Scott Pilgrim. I'm sick of the "hipster, awkward nerd who either can't get a girl (Year One, Youth in Revolt, Superbad) or is rebounding from one." (Nick and Norah's Infinite Playlist, Juno to an extent) It got old, fast. I couldn't help but wish someone else played Scott. Sure the part seemed like it was perfect for Cera, but since he plays a variation of this character all the time it didn't feel special at all. Michael Cera is not a bad actor, he just needs a new gig!
Recommended: Yes (if you like video games, comic books, or over the top special effects..or want to see Chris Evans' best Batman voice)
Grade: B
Memorable Quote: "Scott, if your life had a face I'd punch it." - Kim Pine (Alison Pill)