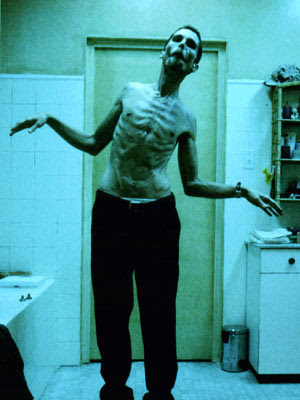 Trevor Reznik (Christian Bale) is an industrial worker who hasn't slept for months. His rail thin frame shows it. Trevor begins to question his own sanity after an accident at work. He sees a man named Ivan, (John Sharian) but no one else can. "No one ever died from insomnia" Trevor remarks at one point, but can you go crazy from it?﻿
Christian Bale reportedly dropped down to about 125 lbs to star in this film. (Then he bulked up quickly to play Batman no less) His body is terrifying, he looks so unhealthy and he did it all for this roll. Trevor isn't a simple character, and Bale gave everything for this performance. The film's dark twists and turns keep you on the edge of your seat throughout. The film was shot in Barcelona, Spain but was made to look like Las Angeles, CA. I thought the film makers did a really good job of making the mostly grey scenery look convincing and fit in with the gloomy tone of the film.
Recommended: Yes
Grade: A
Memorable Quote: "If you were any thinner you wouldn't exist." - Stevie (Jennifer Jason Leigh)
Indie Gems