Review: The Chronicles of Narnia: Voyage of the Dawn Treader 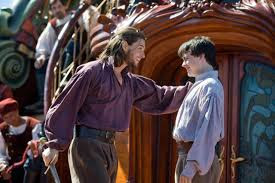 The last time we saw the Pevensie children, the two eldest were told they have out grown the magical land of Narnia. Now the younger siblings, Edmond, (Skandar Keynes) Lucy (Georgie Henley) and their obnoxious cousin Eustice (Will Poulter) are pulled back into Narnia through a painting with the now King Caspian (Ben Barnes, who apparently didn't like the accent he used in the previous installment) and company as they sail aboard the Dawn Treader. Edmond is still trying to be treated like an adult (much like Peter in Prince Caspian) and is sick of being in his older brother's shadow. Lucy is now nervous about being as beautiful as her sister when she grows up, which I found a little weird because she already technically grew up once. Didn't she remember what she looked like?

Dawn Treader is a particularly hard book to adapt in the first place because there really isn't a villain. They are forced to make up one (green mist) and jump about the book. I can't imagine hardcore Narnia fans would be pleased with the fact that the movie doesn't follow the same order as the book and has characters that don't belong. The film has inconsistent CGI effects and wooden performances from the entire cast. The best part of the movie is the touching ending. Oh yeah, and Liam Neeson's voice is awesome. While it's a good film for families, I felt like it dragged. I expected much, much more.

Recommended: No for Narnia fans, yes if you are just looking for a family-friendly movie for the kids.

Memorable Quote: "I licked ALL of them!" - Edmond (Skandar Keynes)