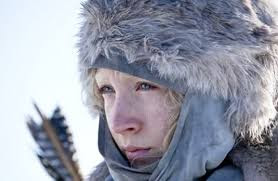 ﻿
There's something special about Hanna. (Ronan) She's not like any other 16 year old girl. See, Hanna knows a handful of different languages. She knows how to fend for herself in the wild. She knows self defense, whether it be with her fists, guns, or knives. Hanna has been living in the middle of nowhere with her father Erik (Eric Bana) and now she's ready. She's ready for Marissa (Cate Blanchett) to come find her. Marissa won't stop until she is dead, so Hanna must off her first.
At first we're not told why Marissa wants Hanna, but it's not hard to figure out the intrigue. Hanna lets these people capture her only to break away from their compound and hitch a cross country ride with a family that is curious about the girl traveling alone. Hanna's never known friends or love. We watch her try to adapt into normal life while it's obvious how abnormal she really is. Director Joe Wright keeps the balance between coming of age and bad ass. The only problem I had with the film was that they didn't explain Marissa's intentions thoroughly enough. We know why she wants Hanna, but what exactly does she want to kill her? Why did she target the program in the first place? Wouldn't she benefit from Hanna being alive? It didn't stop me from enjoying the movie, but I would've liked a little more background on Marissa.
Recommended: Yes
Grade: A-
Memorable Quote: