Indie Gems: Notes on a Scandal 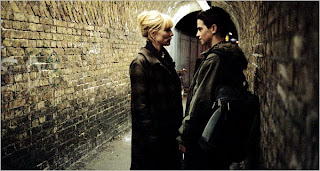 Sheba Hart (Cate Blanchett) is a teacher at a new school. She's younger and prettier than most of the other staff, so everyone takes notice of her. Barbara Covett (Judi Dench) is a strict, older teacher who befriends Sheba and eventually learns a dirty secret: Sheba has started to have an affair with a fifteen year old student. Barbara is becoming more and more obsessed with Sheba, and essentially black mails her with her knowledge of the affair. She wants Sheba to stop, but not for her husband and family, but so she can have her all to herself.
The performances in this film are beyond top notch. Both ladies deserved the Oscar nominations they got for this. Cate is so conflicted as Sheba. She's ultimately our protagonist, but we know she's doing something wrong. Yet, we still want to see her come out ok because Judi's character is so stern and frightening. That's how you know a film is powerful. When you are so drawn in to the characters that you really have to think and question their actions.
The supporting cast is great as wel. Bill Nighy as Sheba's older husband, Andrew Simpson as Steven, the young boy having the affair, even Juno Temple as Sheba's moody daughter. They all fit in so well. The music is haunting and beautiful, and the film is shot with grace. I definitely recommend it to any Blanchett or Dench fan, because these are some of their best performances.
Recommended: Yes
Grade: A
Memorable Quote: "My boyfriend is older than your boyfriend!" - Polly Hart (Juno Temple)
Indie Gems