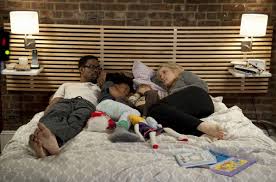 Marion (Julie Delpy) and Mingus (Chris Rock) are a couple living with their two children - both from previous relationships in New York City. Marion's father and sister are coming to visit from France. Mingus is meeting them for the first time. Cultural differences clash, and there's the added pressure of Marion's upcoming art show.

Prepare yourself for a lot of bickering, the cast argues their way through the entire film. That's where a lot of the subtle humor takes place. It could've easily been over done, but it worked. Like I said previously, you won't be lost if you don't see 2 Days in Paris, but I certainly want to see it. Perhaps it will give more insight on why Marion is such a spaz. (That's not a criticism, I enjoyed that about her character) Chris Rock; although he does a lot of awful films is always a joy to watch in my opinion. I loved him here. The dialogue was great, but parts of the script really lacked. There's a spot towards the end that felt overly dramatic.