The D is silent. 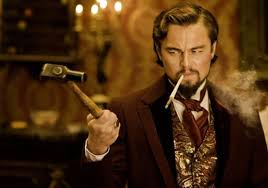 ﻿Dr King Shultz (Christoph Waltz) has enlisted the help of a slave named Django. (Jamie Foxx) Shultz is a bounty hunter, and Django can identify his next bounties. They form a bond, and Shultz offers to help Django free his wife (Kerry Washington) from an eccentric slave owner named Calvin Candie. (Leonardo DiCaprio)

I never thought I would say a scene involving the KKK would be one of my favorites in a film, but alas, that's Django for you. The film is brutally honest when it needs to be, and downright outrageous when it wants to be. In fact, I think Django Unchained might contain one of the best shoot outs in cinema history. Certainly the most creative.

Let's talk about the acting: Brilliant all around to say the last. Christoph Waltz has proven time and time again what a fantastic actor he really is, and he thrives under Tarantino's direction. Leonardo DiCaprio takes on a different role from what we're used to seeing him in, and he totally nails it. I seriously think he will finally get that Oscar we all know he covets. Samuel L. Jackson and Kerry Washington give some of the best performances of their careers, while Jamie Foxx keeps it cool, calm and collected as our lead.

In retrospect, the movie was a bit long. It didn't feel like that to me when I was watching it. It was only after the movie got done and I looked at my watch and thought: "Holy shit, I should've told the babysitter that this was a 3 hour movie." I questioned some of the character's motives at points, but Django still classic Tarantino, and I can't help but love that.

Memorable Quote: "Gentleman, you had my curiosity, but now you have my attention." - Calvin Candie (Leonard DiCaprio)