Indie Gems: Sleepwalk With Me

- January 11, 2013
As if life wasn't complicated enough while you were awake. 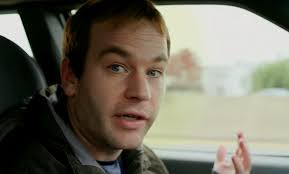 Matt (Mike Birbiglia) is a struggling stand up comedian. He works as a bar tender at a comedy club, he's in a long term relationship with his girlfriend, Abby (Lauren Ambrose) but he doesn't think it's going to work out. On top of all this stress, he's started sleepwalking. Once he starts getting gigs, he blows off his doctor appointments. It gets him into quite a bit of trouble.

The movie is told in flashbacks as Matt is talking into a camera, making his own movie about his experiences. It was a nice touch to add to this quirky film. There is something very real and intimate about this feature, so when I learned it was inspired by Birbiglia's own life, I was not surprised. Matt's journey from being a stuttering comic that fumbled on stage to a confident man getting lots of laughs was rewarding to watch. Then there was the sleepwalking, while that can be a serious condition, it was taken lightly and provided lots of laughs. The film has a short run time, which is sort of unfortunate because there was so much more I wanted to know, but overall this was a great little film to watch.

Memorable Quote: "I don't want to get married until I'm sure nothing else good will happen in my life." - Matt (Mike Birbiglia)﻿
﻿
Indie Gems