DVD Review: Seeking a Friend for the End of the World 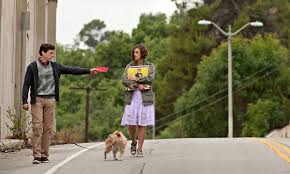 Matilda is the name of an asteroid that's heading towards Earth. Everyone knows once you name something it becomes less of a threat, right?

Dodge's (Steve Carrell) wife skips out on him the minute we learn that Earth is going to end soon. He decides he will spend his last few weeks road tripping to his see his long lost love from high school. His neighbor, Penny (Keira Knightley) tags a long and changes everything.

I'm not sure what exactly I was expecting from this movie. It specifically says it's about the end of the world, so why was I surprised that it was so damn depressing? I don't know. I like seeing Knightley in movies that aren't period pieces. The film itself was endearing at times, had a few great jokes, but really, it was a downer. Although this film does pose an interesting discussion: Do you hate the term 'Manic Pixie Dream Girl?' Do you think Penny fell into the category of that? Personally, I'm split on whether I think that term is insulting as a woman, or fair game because many roles do fall under that umbrella.

Memorable Quote: "I could sleep through the Apocalypse." - Penny (Keira Knightley)