- January 22, 2013
Mama could've been an interesting psychological drama until some asshole said "Hey! Let's turn this into a jumpy horror film." 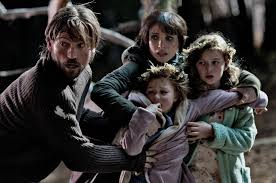 ﻿Yes, I realize this film was based off of a Spanish short film of the same name, but there was so much potential wasted here. More on this later.

Lucas (Nikolaj Coster-Waldau, who is barely in this film by the way) is searching for his missing nieces, Victoria and Lilly. The back story is; Lucas' brother Jeff had a meltdown that basically involved him shooting his wife, kidnapping his daughters and taking them to a remote cabin in the woods. 5 years later, the girls are found, feral, and alone. Only they're not really alone. A spirit they call "mama" has been looking after them. Lucas and his rocker girlfriend Annabel (Jessica Chastain, trying a little too hard) want to care for them, but they don't have the money. So Dr Dreyfuss,(Daniel Kash) who has been studying the girls gives them a house that is used these kind of studies. (But for some reason it is under no surveillance whatsoever. That makes sense.) Soon, strange things start to happen.

My biggest gripe with Mama was that we didn't actually need to see Mama so damn much. Do you know why so many people thought Jeepers Creepers was scary? Because you saw the Creeper a whopping TWO times during the entire movie. Do you know why no one is afraid of Jeepers Creepers 2? Because you see the Creeper ALL THE DAMN TIME. Until the final act, I felt every scene where we actually saw Mama was unnecessary. If we were to assume this was all in the girls' heads, it would've made for a much better movie. Instead, it is dumbed down, muddled garbage. Which is a shame, because the plot itself and the vivid dream sequences throughout are actually very interesting.

I can see how the short film worked. It was only about Victoria, Lilly, and Mama. No one else. The film chooses to add all of these interesting layers, then throws them out the window for a few cheap scares. Maybe I'm extra bitter because the theater I saw this in was full of stupid teenagers that screamed, then laughed after every little thing. I don't look down upon people who get generally frightened in a movie. I've gasped because of the things I've seen on screen before. But full on screamed? That's attention seeking.

Grade: C+ (The + is for the story, it really was interesting. And I love Coster-Waldau and Chastain)