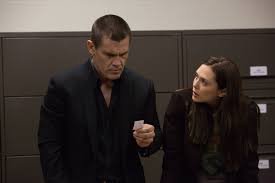 A man named Joe (Josh Brolin) is locked away in a motel room for 20 years. He has no idea why. While he's in this isolation, he finds out he has been framed for his wife's murder, and his 3 year old daughter has been raised by foster parents. He decides to kick his alcohol habit, get into shape, and escape. He doesn't get the chance to do that last thing, because one day he wakes up in a suitcase in the middle of a field. He's got some cash and a cell phone on him. As he wonders around, he runs into Marie (Elizabeth Olsen) a woman that works for a clinic that offers to help him. Together with his old friend, Chucky (Michael Imperioli) they try to figure out what happened. Eventually the person who did this (Sharlto Copley) reveals himself, but he's not finished with Joe yet.

Spike Lee's version feels like he watched the original and said "I can 1 up that." There's more blood, more torture, hell even the stranger's reason for doing this tried to push the envelope a little further. The problem is, in doing all of this, he really lost the point of the entire story. Joe is an asshole. We're introduced to him acting like a total douche nozzle to everyone he runs into. Why the fuck should I care why he gets imprisoned? Dae-Su (the man in the original) wasn't shown in this light. Yes, he was shown as an alcoholic, but we never saw him being unkind to anyone. That made me sympathize with him.

The original Oldboy, despite having its grisly moments wasn't nearly as gory as this version, and it worked better. The infamous single take hammer scene is ruined by coming off as overly cartoonish (and not filmed in a single take) and worst of all, both Brolin and Copley over-act  throughout the entire film. Elizabeth Olsen was the only saving grace, but I mostly felt bad for her getting stuck in this film. There's also a major part of her story that is left out in this version* and frankly, it makes her story kind of unbelievable.


*hypnosis. Not hypnotizing Marie seems like a huge risk, doesn't it? How could Adrian be absolutely sure she would do what he desired just by "raising" her to be who she was?