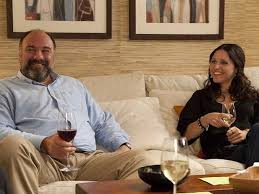 Sounds interesting right? If you're me, then probably not. Nonetheless, I decided to check this one out since I've been loving Julia Louis-Dreyfuss on Veep lately, and for the recently departed James Gandolfini.

Eva (JLD) is a masseuse who hasn't really gotten back into the dating game since she's been divorced. Her only child is about to leave for college, and at a party she meets Albert, (Gandolfini) another divorcee with a child leaving for college. He's not her type right away, but they bond. Eva also unknowingly bonds with his ex, Marianne, (Catherine Keener) not putting two and two together until late in the game.

This movie was just so damn charming. I never thought in a million years that I would enjoy something like this. I loved the relationship that Eva had with her daughter and her daughter's friend (even though the latter is probably not the healthiest) It feels like we don't see things like that often in film anymore. Not to mention JLD and Gandolfini have tons of chemistry. The film can be a little bitter at times. Eva gives Albert a lot of crap for his eating habits and "belly" and knowing James Gandolfini died of a heart attack just makes that hard to swallow. I actually found myself getting really offended during those scenes.

Either way, on paper to me, the film doesn't sound interesting, but I was pleasantly surprised and it has become one of the sweetest things I've seen in a long time.

Memorable Quote: "What about us? What about protecting us." - Albert (James Gandolfini)
Indie Gems