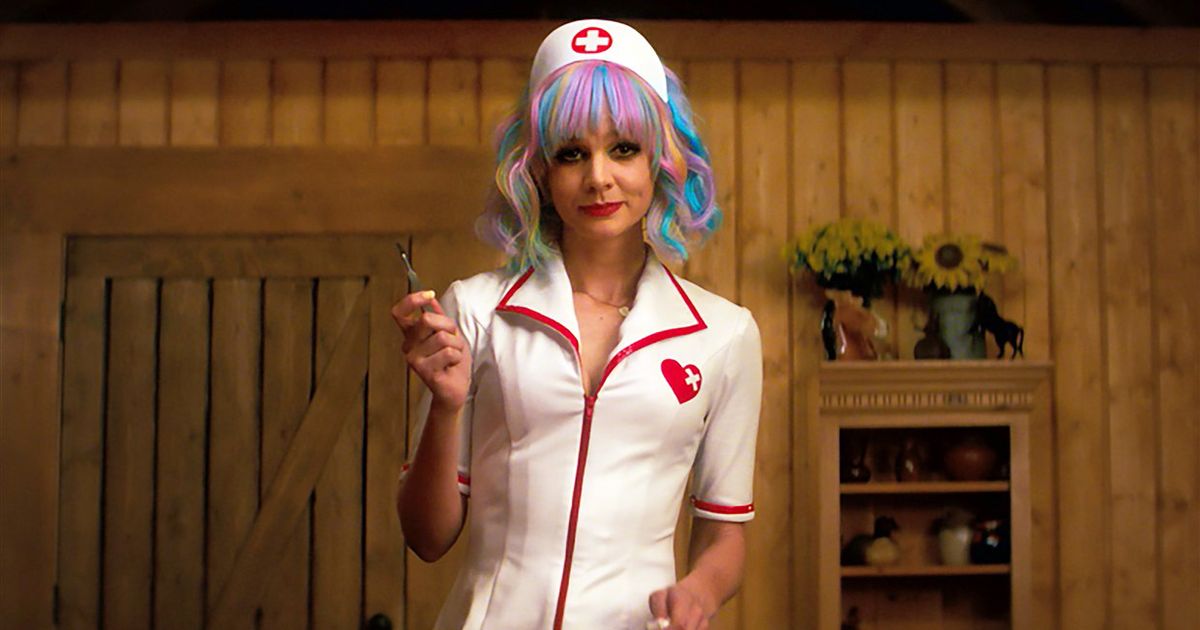 Cassie (Carey Mulligan) was once a promising young woman in med school, then when her best friend Nina is raped at a party and the school took no action, Nina and Cassie both dropped out. It's now seven years later, Nina has died by suicide and Cassie enacts her revenge by pretending to be too drunk to stand at bars every week. Inevitably, a man will try to take her home and take advantage of her, only for her to turn the tables on him and lecture them on what they're doing. A former classmate Ryan (Bo Burnham) comes back into her life and for a moment we think Cassie is finally going to move on. Then something brings her back.

Promising Young Woman has been on my must see list for ages. It got mostly glowing reviews but a few reviewers I'm close with had some serious issues with it, which made me dial back my expectations a bit. Now here I am, 4 days after watching and still trying to put my thoughts together on how I feel about the movie as a whole. Because while I enjoyed parts of this movie immensely, there were a few things that really bothered me that I can't let go.

I can accept that Cassie's plan is very far fetched. The notebook she logs her catches in has some of them marked in red, and we can assume those ended violently. We don't see those moments. There's even one point where Cassie takes a tire iron to a man's car and all he does is drive off. The fact that Cassie isn't harmed during this scene is incredible, and I'm glad that director Emerald Fennell chose not to show this violence. Until she doesn't of course. More on that later.

I think it was a strange choice to never show Nina as an adult. I get the point Fennell is trying to make, that she was erased in favor of her male attacker, but without her there it leaves this void in Cassie's plan. There's one scene where we meet Nina's mother (Molly Shannon) and she tells Cassie to move on for "all of us." Was she aware of what Cassie has been doing nightly or is it just because of her living/work situation? There was so much missing there.

Before I get into the ending, which I'll tag with spoilers as that's where the bulk of my issues lie, let's talk about the good, because there is a lot of that. Carey Mulligan is as wonderful as everyone says she is. Even though I can't get behind what Cassie is doing, I was still concerned for her and even amused by some of her less offensive antics (like the long glare she gives those construction workers) I also really liked her banter with Bo Burnham. The costumes were a huge stand out. Cassie dresses like an Easter Egg. I loved all the bright pastels and I really hope this in particular gets recognition at the Oscars.

This paragraph is going to get SPOILERY so skip to the next if you don't want to read this.****The thing that absolutely threw me for the loop was the ending. Cassie decides to show up at Nina's rapist's bachelor party, drug all his friends, then cuff him to a bed so she can go full Girl With a Dragon Tattoo on him and carve Nina's name into his body. Of course he breaks free, and in an excruciating long take, he suffocates Nina. Her death is the only violence we see on screen. Then immediately afterwards the dialogue between the two men who dispose of her body is played for laughs. This was so jarring to me. Even though this men are committing a crime, they're written in the same light as Bo Burnham's character, who had a lot of funny comments throughout. If Cassie absolutely had to die in this story, why give her killer that levity? It's bad enough that she could've just drugged him like she did everyone else, got her carve on, then left with her life. Thankfully, Fennell does give these characters their comeuppance with some timed texts Cassie set her phone up to send after the fact, but the fact that she put so much trust into a shady lawyer to assist her with that plan just made me anxious. That also could've gone so incredibly wrong. And the cynic in me thinks her killer is going to get off light again. Because yes, he murdered her, but now all his friends are going to tell them they were drugged. The guy whose car she totaled will probably come forward with that account, and Ryan can freely admit he was blackmailed. All of this will work against Cassie. He'll probably get off on self defense. And ultimately what was all of this for? Cassie is dead like Nina. All the men she turned the tables on will see this murder trial play out and probably dismiss their encounters with her as "she's a psycho" and will go on being shitty humans. *** END SPOILERS.

Ultimately I appreciate the effort here more than the execution. It's very well made and provocative, but some of the writing choices were gross. I keep thinking of Michaela Coel's HBO show I May Destroy You that also premiered this year. I just preferred how that was wrapped up. It wasn't tied up with a neat little bow, it wasn't afraid to show how messy its protagonist could be while dealing with her trauma, but it was so honest and not at the expense of anyone else. I just didn't get that with Promising Young Woman.

Recommended: Yes - because I'd love to here your thoughts on this.

Memorable quote: "You can spit in it if you want." - Ryan (Bo Burnham)