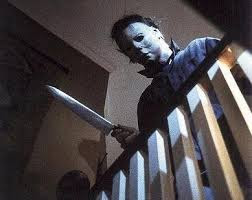 Michael Myers (Tony Moran) stabbed his older sister to death when he was just a child. After being in a mental hospital for all of his youth, he escapes and returns to his home town of Haddonfeild, IL. His psychiatrist, Dr. Loomis (Donald Pleasence) has an idea of what Michael might do. He's returned to target young Laurie Strode (Jamie Lee Curtis) and her friends.
Halloween continues to be one of the most frightening movies of all time. There have been many sequels, even a few remakes, but none can compare to John Carpenter's original masterpiece.  Besides his creepy mask (and the wonderfully ominous score that follows him) we didn't know a whole lot about Michael Myers. That's what made him so scary. He was just plain crazy, no intentions, just the need to kill. In Jamie Lee Curtis' first role, she cemented herself in the screen queen scene.
You have to have a lot of respect for this Indie Gem. It was the highest grossing independent film of it's time. They had to paint fake leaves to make it feel like fall, then gather them after they filmed a scene. All of the actors wore their own clothes, the majority of the film's minuscule budget ($320,000) went towards the cameras used to shoot the film. Hell, Michael's signature mask was a William Shatner Star Trek mask painted white! That's making the most of your money.
Recommended: Yes
Grade: A
Memorable Quote: "He was standing right there.." - Laurie Strode (Jamie Lee Curtis)﻿
Indie Gems