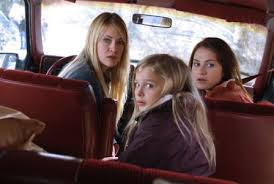 You either love or you hate the After Dark Horrorfest. Personally, I love it. Sure they distribute some truly bad horror movies (Hello, Penny Dreadful) but they also produce some gems. Wicked Little things, though a complete cliche at times is one of those gems in my opinion.
Karen, (Lori Heuring) and her two daughters, Sarah (Scout Taylor-Compton) and Emma (Chloe Grace Moretz) move out to a remote house in Pennsylvania that they have inherited. Years ago, many children were buried alive at a nearby mine. The neighbors warn them of the strange things that can happen, and of course little Emma (much like Moretz's character in the Amityville horror remake) befriends a ghost child. Then people start getting attacked. Karen and Sarah must save Emma.
I have to say that I really dig Scout Taylor-Compton and her string of horror movies. She was the one bright spot in Rob Zombie's God-awful Halloween remakes in my opinion. She's a real horror fan, and it shows in her performances. Plus she's got a killer scream. Wicked Little Things managed to be very creepy even though you could guess the ending a mile away. If your going to check out some of the films that have been part of After Dark's Horrorfest, I'd suggest this one. It's not perfect, but it's entertaining.
Recommended: Yes
Grade: C
Memorable Quote: "That did not just fucking happen!" - Sarah (Scout Taylor-Compton)﻿
Indie Gems