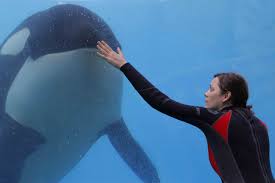 ﻿Ali (Matthais Schoenaerts) has recently moved in with this sister, whom he hasn't seen for 5 years with his young son. He's a fighter, he gets a job as a bouncer at a club and that is where he meets Stephanie. (Marion Cotillard) He broke up a fight she was in, drove her home, and leaves his phone number just in case. Stephanie trains Orcas at a Marine Park, one day she suffers a horrible accident and loses both of her legs from the knee down. (You get the jist of what happened, but they don't actually tell you HOW the accident took place.) Stephanie decides to call Ali and they form a strange bond.

There are parts of Rust and Bone that I really love. Cotillard gives a great performance. Even when Stephanie is most vulnerable, Cotillard still plays her as a tough girl who opens up more and more as she is with Ali. However Stephanie isn't the star of this film. It's Ali, and Ali isn't that likable. He's a terrible father, who borderline abuses his young son. He's irresponsible, and doesn't seem to care about Stephanie all that much. He only cares for himself. So it was hard for me to accept the fact that Stephanie would just call this dude out of nowhere and stay with him throughout all the crappy things he does. She deserves better, but it's like she felt she had to settle.

In fact, Ali is the biggest problem. Not the actor who plays him, he did well, but I just couldn't justify anything Ali did because he was just such a jerk. If Rust and Bone had focused more on Stephanie, her injury, and coming back from said injury to lead a somewhat normal life, then this film would've been phenomenal. Hell, it even made good use of a Katy Perry song. I never thought I'd say that. Rust and Bone is a good movie, but it focuses on the wrong person.

Memorable Quote: "I would just get bored." - Stephanie (Marion Cotillard)