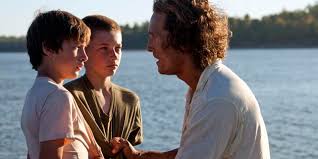 As the parent of a young boy, I'm horrified to think that one day my son is going to ask his friend "Did she have nice titties?" Oh God...
Ellis (Tye Sheridan) and Neckbone (Jacob Lofland) go to an island in the Mississippi river to see s deserted boat in the trees, and instead encounter Mud. (Matthew McConaughey) He's a fugitive, but he tells the boys he did what he did for love. (How very Jaime Lannister of him) They soon start helping him by retrieving parts to get this boat working, and to reunite him with his one true love, Juniper. (Reese Witherspoon) But there is a mini Boardwalk Empire reunion are people hot on his trail, and the boys soon learn that not everything is as simple as it seems.
First off, the two boys in this film were great. Where the hell were the Iron Man 3 casting directors when they were looking for someone to fill their "token precious child" role? Either of these two would've done a much better job. McConaughey continues to impress me, and even Michael Shannon shows up for a short time, (apparently he's director Jeff Nichols' go to guy) though I wish he was in it more. The one that really threw me off was Paul Sparks. At first, I couldn't figure out where I had seen this guy from. Then when it dawned on me that he's Mickey Doyle in Boardwalk Empire, I was kind of floored. He was so different here.
The look and feel to Mud felt really authentic. Much like Nichols' previous film, Take Shelter did. He really understands the tough, small town life that he portrays in his films.  This film makes me look forward to what Jeff Nichols will bring us in the future, and I think both Sheridan and Lofland have bright futures ahead of them.﻿