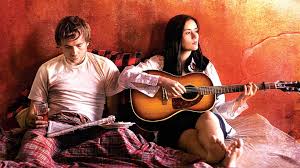 The Hottest State follows William Harding (Mark Webber), a young actor trying to make it big in New York City. He meets singer/songwriter Sarah (Catalina Sandino Moreno) and instantly falls in love with her. She enjoys his company, but doesn't feel as strongly as he does. Yet, she seems quite manic and soon they're in a whirlwind relationship that we know is going to end. They even pretend to break up with each other as a game. We know that can't be good.
Mark Webber caught my attention in For A Good Time Call... Plus there's the fact that he's a Minnesota Twins fan AND dating one of my favorite up and coming actresses, Teresa Palmer, so that makes him instantly interesting in my book. He's good here. Harding is NOT a perfect character. Sarah refers to him as "intense" at one point in the film, and that's a huge understatement. His parents split up when he was a kid and his mother moved them from Texas to New York. He resents his mother for this, but has even more issues with his father, who promised to visit, but never did. Sarah isn't perfect either. She's got plenty of insecurities, but Catalina Sandino Moreno (of Maria Full Of Grace fame) plays her beautifully. Many of the scenes are scored with Sarah singing the songs she writes, and she sounds lovely.
What makes this film interesting to me is the perspective. I don't really care for William or Sarah as characters. But instead of being bored and writing this movie off, I was still intrigued and wanted to see how it ended. It's funny that you can still enjoy a movie, despite not caring for the leads. Rust and Bone had a similar feeling. Michelle Williams and Laura Linney have bit parts, but this is really Webber and Moreno's film) This film is based on a book, though I haven't read it.
Grade: B
Memorable Quote: "Your whole life, people are gonna ask you to be weak. They're gonna practically beg you. But all anyone really wants is for you to be strong." - Sarah (Catalina Sandino Moreno)﻿
Indie Gems