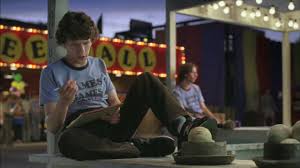 In some instances, maybe it lasted even longer than the summer. Either way, that first minimum wage job is gives our lead character his reality check.
James (Jesse Eisenberg) had planned on spending the summer after college in Europe, however he has some financial set backs and is forced to take a job at a local amusement park. It's at this job that he becomes infatuated with Em, (Kristen Stewart) makes new friends and learns a lot of life lessons on the way.
Despite this film having the typical awkward performances of Eisenberg and Stewart, it's actually very enjoyable to watch. They work well in the roles given to them, and the supporting cast (Bill Hader, Kristin Wiig, Ryan Reynolds, etc) are nice additions as well. I found this movie to be a little nostalgic in a way. It reminded me of all of the summers I spent working multiple jobs during school, and how I don't miss that at all.
Grade: B
Memorable Quote: "Can you stop saying "'ntercourse"? - Em (Kristen Stewart)﻿
Indie Gems