Indie Gems: Thank You For Smoking 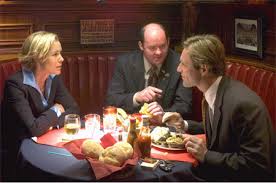 Nick Naylor (Aaron Eckhart) is a tobacco lobbyist. He's a talented public speaker and serves as the chief spokesperson for Big Tobacco. He takes his young son (Cameron Bright) along with him on what he thinks will be a routine business trip, but it wouldn't be a movie if everything went according to plan, right?
This was the first Jason Reitman film I'd ever seen. I guess it appealed to me because even though I don't smoke, I grew up constantly around it. So when I hear people complain about smoke in a bar, I kind of just want to slap them and tell them to get over it. That aside - this was the start of what became Reitman's classic style. It's funny, deadpan, and the cast is fantastic. Even Katie Holmes manages to turn in a performance where she doesn't suck.
One of the things I enjoyed the most about the film was the subtitles that appeared at the bottom of the screen occasionally. That was a nice touch. And another fun fact: Even though this film is about smoking, there's not a single character that's see smoking on screen.
Grade: A
Memorable Quote" "These environmentalists." (pussies) - BR (J.K Simmons)﻿
Indie Gems