Review: And Then We Danced 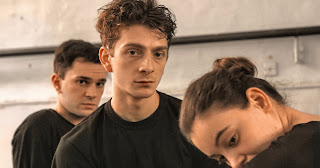 Merab (Levan Gelbakhiani) is a young dancer in Tbilisi, Georgia. He has been paired with his partner and friend, Mary (Ana Javakishvili) since they were children and is vying for a spot in a traveling company. Then another dancer, Irakli (Bachi Valishvili) shows up and tests Merab with his natural talent. They begin to form a friendship, then a hidden romance that can under no circumstances be known about in their conservative country.
I think the only other Georgian film I've seen was the wonderful joint Estonian feature, Tangerines. This one had a fair bit of buzz this winter, so I was happy to see Netflix had it available to rent on DVD.
In terms of plot, aside from the setting this forbidden love type of story has been done countless times. But director Levan Akin gets such honest performances from his actors and it's the smaller choices that make this stand out. For instance, despite this being a movie about dancers, there's no flashy dance sequence. Most of what we see are their rehearsals. The majority of the homophobia is also thankfully off screen, though the implications of it are clear.
Levan Gelbakhiani is one hell of a performer. He plays Merab with so much earnest. He's hard working and curious and I was able to connect with him instantly. On the other side of it, Bachi Valishvili is immediately enthralling. You don't have to wonder for a second why anyone will be drawn to him. Ana Javakishvili has a smaller role, but I liked her as the friend for Merab to lean on. She may not have a lot to do, but that doesn't make her character any less important.
This is a bit of a slow burn, but ultimately it's very much worth the watch.
Recommended: Yes
Grade: B
Memorable Quote: "It's like placebo..." - Mary (Ana Javakishvili)