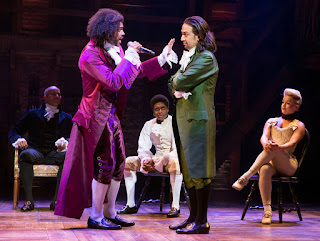 Captured live on Broadway in 2016, this play follows one of America's founding fathers Alexander Hamilton (Lin-Manuel Miranda) re-imagined with a blend of hip-hop, jazz and show tunes.
I feel like you'd have to be living under a rock to have never heard of Hamilton at this point. It premiered to what felt like unanimous acclaim, tickets were almost impossible to come by  (even when they started touring with a new cast) and it was nominated for 16 Tony's and won 11. Disney announced they would be bringing this to theaters in 2021, only to bless us with it early on Disney+ during the pandemic.
I really wanted to see Hamilton, but alas, no tickets. I avoided the soundtrack as best as I could because I wanted to see it *with* the show. I'm glad I did that. Hearing the majority of the songs for the first time while seeing the stage play was the right way to go, and I've had them stuck in my head since.
This show is so high energy and the cast is exceptional. I was already a huge fan of Daveed Diggs from his work in Blindspotting and he was outstanding here. Easily my favorite performance. Other actors I was familiar with like Miranda, Leslie Odom Jr, Anthony Ramos, Christopher Jackson and Jonathan Groff were wonderful too, as were all the new faces I was introduced to.
The second act is a tad slower than the first, but it's final song is so beautiful that it brings the quality right back up to where it was in act one. This is something I can see myself watching over and over again. Even the fact that my dumb ass started watching it at 9:00 pm without thinking "Hey, this is three hours long" could dampen my excitement.
Recommended: Yes
Grade: A
Memorable Quote: "Oh, can I show you what I'm proudest of?"  - Eliza (Phillipa Soo)