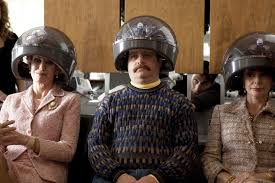 When Cam Brady, (Will Ferrell) a four term congressman from North Carolina starts to falter, two Big Wigs decide to push a naive candidate to rival him. That man is Marty Higgins. (Zach Galifianakis)

I could explain the film a little bit more, but really, it's not worth the time. I personally never tire of Will Ferrell. I think the guy is hilarious and I always watch whatever he's in. Especially when he works with Adam McKay. Anchorman, Talledega Nights, Step Brothers, I loved all of those. But The Campaign just falls short. Though Farrell and Galifianakis have some great lines, and Jason Sudeikis steals scenes as Brady's campaign manager, Mitch, it just feels long and inconsistent. The character of Marty felt A LOT like Jack Black's character in Bernie. The voice, the peppy personality, even though the films were likely shot around the same time and had no influence on each other, I just kept thinking about how much more I liked Bernie.

Ferrell's comedies aren't always perfect. Despite it's potential,  The Campaign will fall within the likes of Semi Pro and Kicking and Screaming. It's just not that great.