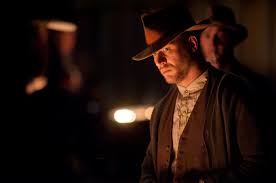 The Bondurant brothers - leader Forrest, (Tom Hardy) Howard, (Jason Clarke) and Jack (Shia LaBeouf) are in the bootlegging business. There's rumblings all over town that these boys are invisible, something Jack really wants to believe. A new law enforcement officer Charlie Rakes (Guy Pearce) shows up and threatens to end their operation.

There's a lot of promising performances here, but the film itself just doesn't hold up. Forrest is barely audible, Jack makes plenty of stupid decisions, and a small part by Gary Oldman is squandered. His character's first scene makes him feel important, he shows up one more time and is gone for the best of the film. But the ones who really take the hit are the women. Jessica Chastain and Mia Wasikowska, both very capable actresses are given little do to, and are treated even worse. This film isn't kind to women, though I suppose the bootlegging business wasn't kind to them either. I grew tired of seeing Chastain's character harassed and Mia's not having any words of her own.

I wanted to like Lawless, they have a wonderful cast, but I just got an overwhelming feeling of "meh" while watching it.