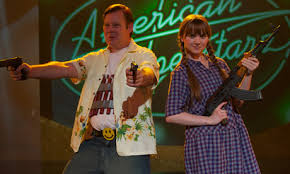 Frank (Joel Murray) has just about had it with society. He fantasizes about killing his obnoxious neighbors and their crying baby. He hates going to work and listening to his co workers talk about ridiculous reality TV shows. After he loses his job and finds out he's terminally ill, he decides he's going to rid the world of it's stupid people that are put on a pedestal. After blowing a spoiled reality teen's brains out, he meets Roxy, (Tara Lynne Barr) a 16 year old school girl who hates life just as much as she does. After constant pestering, she becomes his accomplice.

The beginning of this movie wades in preachy territory, but it eventually subsides and we are left with a pretty amusing montage of Frank and Roxy getting rid of a variety of people. At one point, there's a scene where they off people in a movie theater for talking, then thank the lone person from their attack for being quiet during the movie and not using her cell phone.

With the debate on guns being a hot topic right now, this makes the film even more interesting. There's a point where Frank remarks that there should be less gun control, and Roxy replies "then every lunatic would have a gun." This is of course after she's just shot a man multiple times. Sure, this film has an agenda, but with it's clever dialogue and perfectly cast actors, it makes for a fun ride. Considering all the violence, I'm almost ashamed to admit I liked it as much as I did.

Memorable Quote: "I live in an apartment with paper-thin walls next to a couple of Neanderthals who, instead of a baby, decided to give birth to some kind of nocturnal civil defense air raid siren that goes off every night like it's fucking Pearl Harbor."
Indie Gems