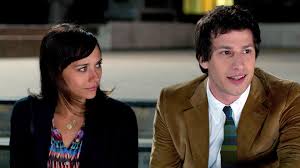 ﻿Celeste (Rashida Jones) and Jesse (Andy Samberg) are going through a divorce. But you would never know it until one of the characters (scene stealing Ari Graynor) in the film points it out. They are separated, but Jesse is still living in the guest house. They are trying to remain best friends, still sharing plenty of inside jokes, and the occasional tryst. When Jesse starts dating someone else, Celeste isn't as cool with it as she would've hoped.

It seems that Celeste and Jesse have the world's easiest divorce. How many unmarried couples can joke like they do? Probably not many. Jones and Samberg have amazing chemistry, but I felt they struggled a little when the film got more emotional. There's some great supporting players; Ari Graynor as Celeste's BFF, Beth. Elijah Wood as her partner, Scott. Last but not least is Emma Robert's as a spoiled pop star that Scott and Celeste are working with.

Celeste and Jesse seem perfect for each other, so we as the audience want them to stay together. Whether it's what is best for them is another story. I really enjoyed watching this. I found it so touching, not many rom coms do that for me these days.