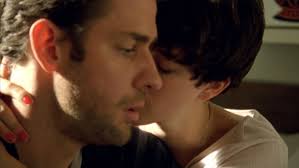 ﻿Martine (Olivia Thirlby) is a young filmmaker who arrives in LA to put the finishing touches on her art film. She stays with Peter (John Krasinski) and his family. Peter is a sound mixer who is helping her finish her film. Meanwhile his shrink wife Julie (Rosemarie DeWitt) has a hard time with a patient that's obviously pursuing her, and with the slight crush she notices Peter has on Martine. Then there is their 16 year old daughter Kolt (India Ennenga) who is fascinated with Peter's assistant, and also ends up unknowingly attracting her Italian tutor.

Nobody Walks felt like it was missing something. There is no climax to this film, nothing gets resolved. That's how life is, but it doesn't make for a very interesting story. Olivia Thirlby does a great job of playing Martine. You never know if she is aware of the sexuality she possess or not. Men fall all over her in this film, and she doesn't turn them away without giving in a little. I thought Krasinski did well too, although as the material got heavier, it seemed like he was having trouble keeping up. I would like to see him in more comedies. The subplots with the wife and daughter were wasted. Ennenga's Kolt is far more annoying than anything, and even though she has some of the best lines in the film (due to a poem she reads) I just couldn't get in to her character.

The strange thing about all of this is, I actually enjoyed watching this film. When it ended, I felt empty. I like something was truly missing. This film could've been great, instead it is just drifts by us. In hindsight, I should've known. When the credits started rolling and I saw this film was written by Lena Dunham, it makes sense why only the "hip New Yorker" is interesting and the rest are flat out boring.

Memorable Quote: "This is probably the last time you will be hearing from anyone in this family." - Julie (Rosemarie DeWitt)