Making a case for The East

I'm kidding, but that would be hilarious..

You know, I'm having a hard time coming up with something for Stevee's blogathon this year. She asks us to make a case for someone that moved us that's more than likely NOT going to get an Oscar nomination. Last year, I made a case for Pierce Gagnon that adorable FIVE year old kid in Looper that stole every scene he was in. Honestly, a lot of things I've seen this year seem pretty likely to get Oscar consideration. Prisoners is still my favorite of the year. I thought about making a Best Picture case for it, but honestly, I think it could still squeeze itself in there. So, I'm going with a film that I saw back in June that I'm afraid is largely forgot about - The East. 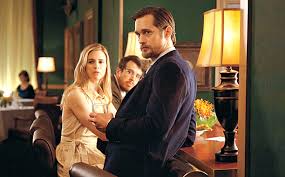 Yes, that guy seriously has 'batman' in his name. They've collaborated together before on Sound of my Voice and Another Earth. (I haven't seen either, but they're in my queue) The East is about a young woman played by Marling that infiltrates an eco-terrorist group. She becomes torn when she grows closer to the group's leader, and starts to understand things from their point of view. Marling's not the only great performance, Ellen Page and Alexander Skarsgard are strong as well. I really just loved The East as a whole. These people are obviously doing very dangerous things, but they're passionate behind their reasoning, and we see consequences from both sides. The film is tense, clever, and expertly shot.
No one is going to remember this little Sundance darling come Oscar time. We can only hope the Independent Spirit Awards give them some love. But, I don't think you should discredit The East. It really is a wonderful little film that deserves to be noticed.
blogathon