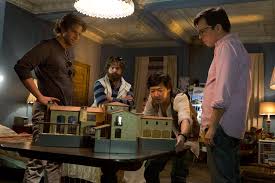 Alan (Zach Galifianakis) has gone off his meds, and off the deep end following his father's death. His brother-in-law Doug (Justin Bartha) and his reluctant "friends" Phil (Bradley Cooper) and Stu (Ed Helms) offer to drive him to a rehabilitation facility in Arizona. They are intercepted by Marshall (John Goodman) who wants revenge against Mr. Chow. (Ken Jeoung) Chow's recently broken out of prison, and he stole a bunch of gold from Marshall. He thinks Alan is the only one who can get him Chow since he's the only one he's communicated with. He takes Doug as collateral, and Alan, Stu, and Phil are off on yet another crazy adventure.
I actually appreciate how deep they dug into the Marshall/Chow story. Seriously, most sequels/series do less to make the new conflicts relevant. This one, Todd Phillips actually went back to an offhanded remark Black Doug (Mike Epps) made in the first film to tie this all together. I applaud the effort.
I also enjoyed the fact that this wasn't a carbon copy of the original like Part II was. This one, wacky at times didn't stick to the same formula and was still full of laughs. Although it was a little too Chow heavy for me. Part III never had to be funnier than the original. That will never happen, but I still think it was enjoyable way to end the series. I almost missed the "crazy picture montage" at the end, even though no one surprisingly got drugged in this film.
Recommended: Yes
Grade: B-
Memorable Quote: "You should take your shirt off. I heard it's easier." - Mr. Chow (Ken Jeoung)﻿