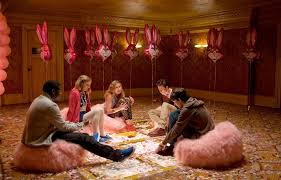 So the funny thing about Chatroom is that I was searching through Richard Madden's filmography, saw he was in this, and threw it in my queue, assuming it was a horror movie. Well, he's only in it for about 2 minutes, so don't watch it for that purpose alone, but it's not a horror movie and it's actually quite interesting.
William (Aaron Taylor-Johnson) starts a chatroom online called "Chelsea Teens!" It attracts wannabe model Eva, (Imogen Poots) goody two shoes Emily, (Hannah Murray) shy and tormented Jim (Matthew Beard) and seriously confused Mo. (Daniel Kaluuya) As they get to know each other, they feed into each other's bad behavior. Particularly William, who tries to take Jim's depression down a horrifying route.
Don't worry, the film isn't a bunch of kids sitting in front of their computers, the chatrooms are staged like an old abandoned hotel, with each room represented by the creator's personality. So even though these kids have never met face to face, we see them sitting in chairs together around a room. I thought that was a really neat way to show this. The film did tend to get a bit theatrical, but this film is also based on a play, so that's what is to be expected.
I loved the cast, these are some of the best young British actors around. Taylor-Johnson and Poots have started to make an impression in the U.S. Hannah Murray is on Game of Thrones, so she's familiar, but it's Daniel Kaluuya who I hope gets more recognition. This kid is awesome (just like he was in The Fades) even if he's essentially playing the same type of character.
Grade: B
Memorable Quote: "...myself." - Jim (Matthew Beard)﻿
Indie Gems