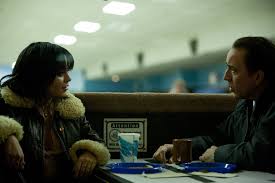 Based on a true story, a man named Robert Hansen (John Cusak) has been kidnapping, raping, and murdering girls in the middle of bumfuck nowhere Alaska for ages. One of these girls, Cindy Paulsen (Vanessa Hudgens) actually escapes him, and the police won't believe her story because she's a prostitute and he's some outstanding citizen. It's up to about-to-move-away police officer Jack Holcombe (Nicolas Cage) to bring this man to justice since he's the only one that believes Cindy.
I'd say "no one can possibly be this stupid" but since this actually happened, apparently the police can actually discredit a bunch of very related deaths as the work "not of a serial killer" and not believe a victim that gives a pretty clear description of who took her. That's really a damn shame for the real Cindy Paulson. (who came forward with her story to the film makers)
Cage and Hudgens are not strong actors, but they are surprisingly not the worst ones here. (Hell, I was expecting Cusak to be more along the lines of his Paperboy character) It's nearly everyone else. The guy that plays the DA? Terrible. 50 Cent shows up as a pimp - really!? The acting all around is over the top and flat out awful. Not to mention, you can really tell where the "added drama" was in regards to the real story. If you're going to alter a story like this, let it flow freely. It shouldn't be painfully obvious that you are adding a "close call" scene in here or there.
That prop I can give this film? They had the opportunity to show a bunch of gratuitous rape scenes, but they didn't. They didn't show any at all. That I can appreciate.
Recommended: No
Grade: D
Memorable Quote: "I had stuff happen to me. Stuff that ain't supposed to happen to little kids." - Cindy (Vanessa Hudgens)﻿