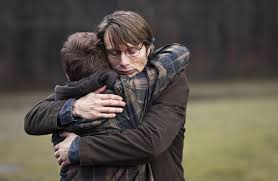 Lucas (Mads Mikkelson) is a man who's recently gone through a divorce. He works as a kindergarten teacher where his best friends young daughter, Klara (Annika Wedderkopp) attends. She has a bit of a crush on Lucas, and when he politely puts a stop to it, Klara, hurt and confused tells a lie to a another teacher, Grethe. (Susse Wold) Grethe, faced with the situation of a young child claiming abuse proceeds to deal with said situation in the most unprofessional manner possible, and inadvertently orchestrates a witch hunt against Lucas within their small town.
The Hunt is an absolutely stunning film. The cinematography is wonderful, and there's never a shortage of the beautiful Danish countryside in the Autumn. Mads Mikkelson is the heart and soul of the film. It's very clear early on what the truth is, even if they try to bait you here and there. Lucas can't simply flee town, that would make him look guilty. So he puts up with the awful small town mentality all while his teenage son tries to cope along side with him.
The film can be frustrating. For me, having worked with children that have actually suffered abuse, the way Grethe approached this situation was horrifying. It was absolutely something she should've brought to the police first, and not her acquaintances. Plus, there's doggy death and we all know how I feel about doggy death. Despite the frustrations, it creates great conflict and you cannot take your eyes off of it. Denmark makes some damn good movies.
Grade: A
Memorable Quote: "..you want to tell me something?" - Lucas (Mads Mikkelson)﻿
Indie Gems