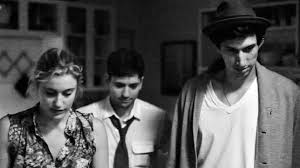 I've had a really indecisive week when it comes to movies. I recently ran a train on my Netflix Instant queue and watched possibly the weirdest set of movies ever. Yet after each one, I had no idea how I felt. It didn't help that I was tweeting at the same time.
The thing about Frances Ha, a tale of a 27 year old New Yorker (Greta Gerwig) who works for a dance company and is really trying to find her way in life when her best friend Sophie (Mickey Sumner) all of a sudden gets her shit together is that I was kind of destined to hate this movie. I tried to see it in theaters, but a good friend of mine insisted that I wouldn't like it because it felt "too Woody Allen-ish." He's right. I hate Woody Allen. I also don't care for modern black and white films. (Just a personal preference, and I know I'm in the tiny, tiny minority who thinks it didn't suit this film.)
When the credits started rolling I thought "Wow, that was the longest 85 minutes ever" and I felt a little disappointed. Then once I got away from my keyboard and out for my run, I thought about it some more. As it turns out, I was actually quite charmed by Frances Ha. Gerwig really was a wonder to watch on screen, and even though I wanted to slap Frances a few times and tell her to stop being such a fucking spaz, I appreciate her for it. Plus it's always nice to see Michael Zegan in something, he was one of my favorite on Rescue Me.  Frances Ha may scream "Hipsters: The Movie" to some, but it's actually quite a nice little pick me up. There's the obvious nods to French new wave cinema here and there, and Gerwig may have a shot at an Independent Spirit Nom later this year. Either way, even though I probably should've hated this film, I'm actually wanting to see it again.
Grade: B-
Memorable Quote: "Ahoy, Sexy!" - Frances (Greta Gerwig)﻿
Indie Gems