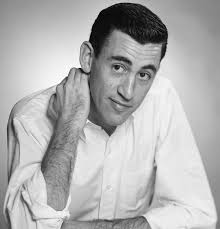 I've never read The Catcher in the Rye. Though I've heard the name Holden Caufield several times, I actually didn't even know what the story was supposed to be about. I had to look it up. Since I haven't read his most famous piece, I obviously haven't read any of his short stories either. Basically, if the entire world depended on me answering Salinger trivia, we'd all be dead.
So why did I watch this? Because I finally became curious. I've passed Catch in the Rye at the library quite a few times, and am only now thinking that I might actually pick it up and read it. (When I'm done re-reading my ASOIAF books, of course.) What is so interesting about J.D Salinger? Why are so many people moved by his work? Why were a select few inspired to kill over it?
This documentary really doesn't offer you any answers to those questions. It's 2nd biggest question; "Why was J.D Salinger such a recluse" isn't really answered either. In fact, it's really just a collection of interviews of people who were around him or had relatives that knew him at various times in his life. The biggest thing this documentary asks is "Is he still writing?" Apparently he was, and his work will be published between 2015-2020.
So here's what I learned about J.D Salinger: He went off to war, and was inspired to write The Catcher in the Rye. He will never give any of the rights of his work to Hollywood because they butchered one of his stories that DID make it to film. He was obsessed about being published in the New Yorker. He may or may not have been a perv who only dated women far younger than himself. He was also kind of an asshole. While I felt like I learned quite a bit, I almost wonder if this isn't everything Salinger fans knew already? Did it offer anything fresh to the table besides "he's got new work...and you'll see it in a few years from now. Maybe?"
Recommended: Yes, if you know nothing about him, and No if you do. I just got the feeling that everything said here was kind of common knowledge about him already. Please correct me if I'm wrong.
Grade: B-
Memorable Quote: "This girl needs to go to the airport immediately." - J.D Salinger﻿