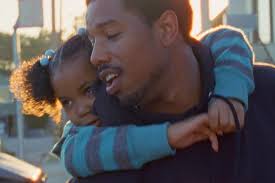 Oscar Grant was a 22 year old man that was fatally shot by a police officer on New Years Day in 2009. In the film, he's played by Michael B. Jordan, and we follow him through his last few days. He's set on bettering himself, and his life with his girlfriend, Sophina (the always enjoyable Melonie Diaz) and their young daughter Tatianna. (Ariana Neal)

Michael B. Jordan, wow, he just gives a really good performance here. (Plus he was in Hardball when he was a kid, and I have a strange soft spot for that movie) Octavia Spencer, who plays Oscar's mother is brilliant in every scene she's in. But one thing I really appreciated about this movie is it viewed everything from a neutral stand point. Oscar had a criminal record and a bit of an anger problem, the film didn't choose to hide that, we got to see that and Oscar at his best, when he's with his young daughter or being helpful to strangers. The police were not portrayed as as the stereotypical "brutal thug policemen" either. This film could've had a serious agenda, but it chose not to.

It doesn't make it any easier to watch. The act itself was extremely senseless, especially when shown cell phone videos of the actual incident. Oscar did not deserve to get shot. The whole thing had me in tears by the end. This review is the very definition of "rambling." I'm having a hard time putting it to words. Just know that Fruitvale Station is a very well made film with great performances on a very tragic event.

Memorable Quote: "Ma, can I get a hug?" - Oscar (Michael B. Jordan)
Indie Gems