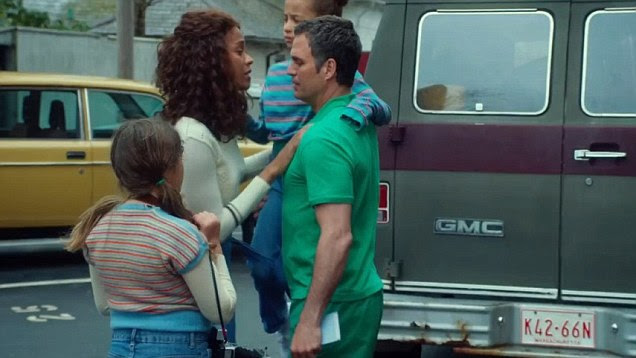 Cameron (Mark Ruffalo) suffers from manic depression and bi polar disorder. When we first meet him, he's having an episode. He lost his job, keeps his kids out of school, and is running around in a speedo. His wife, Maggie (Zoe Saldana) is patient and understands that he's ill. After he's committed, they lose their house and Maggie and their two daughters, Amelia and Faith (Imogene Wolodarsky and Ashley Aufderheide) are forced to live in a small apartment, with Maggie barely making ends meat. She gets a scholarship to Columbia for their business program, determined to get a better job and get her kids a better education. Cameron stays back in Boston to watch the girls while Maggie is away.

Ruffalo is so great here. It's almost weird for me to think that about 5 years ago I didn't like him as an actor at all. Now I think he's just brilliant. Having been around people suffering from these illnesses, I think Ruffalo was really spot on with the highs and lows. Wolodarsky and Aufderheide were absolute gems, sometimes hilarious, some times heart breaking. Saldana was solid as well.

I expected this movie to be sad, but it was actually very funny. My only issue was the score. The way they used the musical interludes almost bordered on a cheesy Lifetime feel. Not that the music wasn't good, on its own it probably is. But mixed here it just felt a bit off.