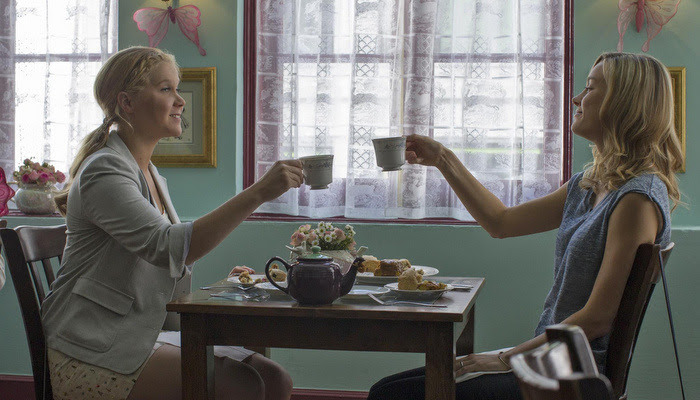 Amy (Amy Schumer) is completely content on only having one night stands. Sure, she's sort of seeing Steven (John Cena. No seriously, John Cena) on the side, but that crashes and burns. Amy writes for a magazine and her editor, Dianna (Tilda Swinton) tells her to write a story on a sports doctor, Aaron (Bill Hader) who is saving athletes' careers one surgery at a time. The two meet and eventually start dating.

Amy Schumer is hilarious. She's vulgar in the best way possible, and a director like Judd Apatow is a perfect fit for her. The cast is wonderful. John Cena, a guy I cannot stand in the ring is actually pretty damn funny here. (And since Schumer dated fellow wrestler Dolph Ziggler in real life I can't help but wonder if this was a bit of a dig towards him) Lebron James is another popular athlete that gets a lot of face time here. The always wonderful Brie Larson plays Amy's sister. Ezra Miller plays an intern who takes part in one of the weirdest sex scenes I've ever seen. Tilda Swinton is nearly unrecognizable and so perfectly bitchy. I could go on and on about them.

While Apatow is a good fit for Schumer's humor, unfortunately the final 3rd of the film falls victim to his style. It drags and becomes very cliche. It's frustrating because it's a tick he hasn't seem to shed yet and the film was so strong up until that point. (though thankfully he left his kids out of this one) Still, it's not enough to completely derail the movie and this is easily one of the best comedies released all year.

Memorable quote: "Your dick is huge! It does not end. It's like the entire cast of Game of Thrones. Have you had sex before? Where is she buried?" - Amy (Amy Schumer)