Review: Me and Earl and the Dying Girl 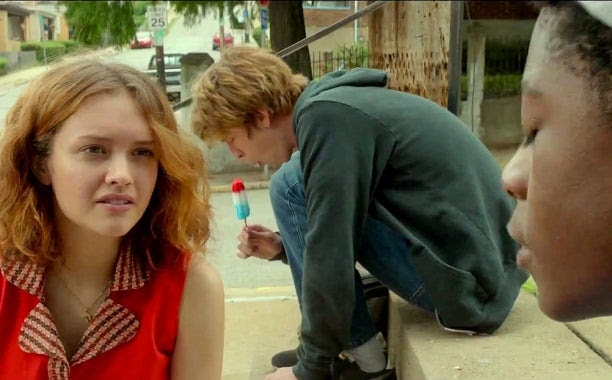 Greg (Thomas Mann) is determined to make it through high school without any real attachments. He's socially awkward, he doesn't want friends, though he has one in Earl. (RJ Cyler) But instead of admitting that he just refers to him as a "colleague" since they're both film fans and make bad movies together. (an example of one of their titles is Eyes Wide Butt) One day Greg's mother forces him to go hang out with a classmate of his, Rachel (Olivia Cooke) whose recently been diagnosed with leukemia. Eventually they form the doomed friendship our title is all about.

I noticed going into this film that there were a lot of complaints about the teenagers being too precocious and that Earl is a walking stereotype. I don't think that Greg, Earl, or Rachel are stereotypes or tropes of any kind. I've been blogging about movies now for over 5 years. Some of the blogs I read are written by teenagers, or they were teenagers when I first found them. So for me, I wasn't looking at these kids and going "OMG what a bunch of hipsters" I was thinking "Okay, maybe these kids aren't too far off from some of the friends I've made online bonding over films." I wish I had that good of taste in films when I was in high school. They were a breath of fresh air.

This film manages to feel different among all the other teenage cancer stories. There's no love story here, just the friendship between Rachel and Greg, with a bit of Earl thrown in. Honestly, I wish Earl has been in it more, because he was fascinating. (And responsible for my first ugly cry face in this film) The actors were all very natural in their parts. The soundtrack was beautiful and really enhanced the scenes, especially a big one towards the end of the film. The way the film is shot is a little strange at first. It's almost like the director wanted to go for a Malick-type style, but it ended up feeling really out of focus and shaky.