- November 30, 2012
One of the greatest independent films of all time. 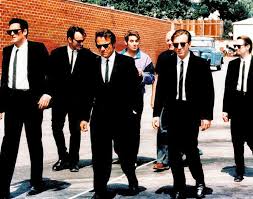 Oh Quentin Tarantino, how could I have gone all these years with my Indie Gems and not included this one. (Seriously, major wtf moment for me.)
A group of criminals are given a job to rob a jewelry store. They have fake names, they don't know each other personally, what could possibly go wrong? Well, the cops show up. Mr Brown (Tarantino) is killed. Mr Blue (Edward Bunker) is missing. Mr Orange (Tim Roth) is wounded and is brought back to their rendezvous point by Mr. White. (Harvey Keitel) Mr. Pink (Steve Buscemi) managed to get the jewels and meet up with Orange,White, and Mr. Blonde, (Michael Madsen) but he is sure that someone ratted them out.
This is film is brutal - but it also became signature Tarantino. The way he handles violence is astonishing. We know right off the bat that this is not any ordinary crime movie. It doesn't start out with a shoot out or a robbery. It starts in a diner with causal conversation and escalates from there. The performances are great - especially from Keitel, Roth, and Buscemi. The film at times can be really hard to watch (I'm sure you know what scene I'm referring to) but the payoff is great.
Grade: A
Memorable Quote: "I don't give a fuck what you know, I'm going to torture you anyways." - Mr. Blonde (Michael Madsen)﻿
Indie Gems