- November 10, 2012
A Bond review from someone that's never sat through an entire Bond film. 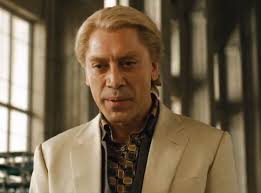 Yes, you read that right. James Bond movies are pretty low on my "give a fuck" list. In fact, the only reason I went to see this was because The Sessions wasn't playing at the time I thought it was. Lucky for me, I actually had a pretty good time watching it.
James Bond (Daniel Craig) is back and this time he's tracking down a very clever (and creepy) criminal named Silva. (Javier Bardem) He's stolen a list of agent's identities and he's hacked into MI6's computers. There's something different about Silva, and it's something that comes back to haunt M. (Judi Dench)
I was really expecting this to be boring. It had plenty of action movie cliches, but I have to say the way director Sam Mendes presented them made it amusing. (The use of the score after a certain car gets blown to pieces is hysterical) The film starts off with a fantastic motorcycle scene that I found very impressive. Mendes also makes Shanghai look pretty damn cool in the middle of the night. The best part wasn't Craig's suave Bond, it was Bardem's Silva. Anyone who's seen No Country For Old Men knows that Bardem can pull off a villain well, and he nails it here. Silva is smart, sadistic, and he actually almost makes you feel sorry for him a few times. It's a shame he doesn't show up in the movie until about 30 minutes in. I would've liked to have seen more.
Recommended: Yes
Grade: B
Memorable Quote: "What makes you think this is my first time?" - James Bond (Daniel Craig)﻿