Getting caught up in a lie. 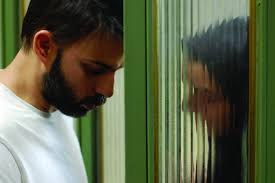 Nader (Payman Moaadi) and Simin (Leila Hatami) are growing apart in their marriage. They fight about living abroad, they fight about the well being of their 11 year old daughter, they fight about Nader's Alsheimer stricken father whom they've been caring for. In the midst of a divorce, they are faced with even more challenging times.
Iran's first film to win an Oscar is equal parts fascinating and frustrating. A Separation never loses it's pace when it's telling the story. What starts as a simple accusation morphs into lies on top of lies. You sort of lose sense on who's telling the truth here, who's doing the right thing, and who's completely wrong. It's frustrating because there is a LOT arguing. The entire film is almost a never ending fight. It's also frustrating because one person is so clearly at fault above all others. (Although not everyone is a saint here.) The ending is frankly, horrible. Sometimes it's ok for a film to leave questions unanswered, and to let the viewers decide. It simply didn't work in this film.
Moaadi is fantastic, this film really belongs to him. Although the the couple don't physically touch each other in the film, you can tell that at one time they truly loved one another and that they had great chemistry. Everything felt very realistic, but what keeps this film from being outstanding in my opinion is the ending. To put it blunty, it's a bit of a cop out.