DVD Review: Grave of the Fireflies 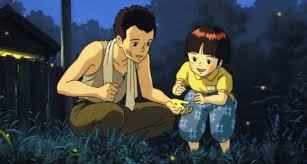 Bambi's mother, the old lady that had to take Todd back to the forest, and Dumbo's mother in a cage have nothing on Seita and Setsuko of Grave of the Fireflies. If there were a prize for "Most Depressing Animated Movie of All Time," this would win by a landslide.
The movie doesn't sugar coat it. The first scene is our main character, Seita (a young boy, his age isn't specified, he seems around 14) dying of starvation, alone and on the streets. As we flash back in time, we see he has a younger sister Setsuko. (she's around 4 years old) She wasn't with him when he died, so we can all but guess what happens to her beforehand. They are living in Japan at the end of WWII and they're city has just been set on fire by air raids. Their mother dies, their father is off to war. First they stay with their stingy Aunt who points out that Seita is lazy and is doing nothing to earn his keep. Angry, he decides that Setsuko and he will live on their own, in a cave, doing what they can for food. We already know where it leads him.
The author of the book on which this is based wrote it as an apology to his own sister, who he lost to malnutrition during WWII. What this film does well is shows the horrible effect war has a children, no matter who's side you are on. Everyone suffers. Seeing young children slowly starve, even if they are animated is a hard thing to watch. Still, I felt like I spent more time trying to justify this film to myself than I did actually enjoying it. The author wrote it as an apology, so he's aware of the horrid decisions Seita makes. Seita is young, (yet he mentions holding a job prior to the air raids) he refuses to work while at his aunts, and refuses to apologize when his sister is on her deathbed. Perhaps if they said he was 11-12 years old, it would be easier to accept his poor decisions because of his young age. Perhaps, since he was also malnourished, he was hallucinating. There's a scene where he goes to the bank to get money to buy food. We know currency is no good during the war because people would rather trade goods. Seita finds out the war is over AFTER he withdraws money. Why would he wait that long to do that? I just wanted a better explanation for the choices Seita makes, other than; "he's a kid and kids are stupid."

If anything, this movie made me over think it. While I can call it effective, I can't call it a masterpiece.
Recommended: No
Grade: C+ (Can't deny it's impact)
Memorable Quote: "I made you rice balls" - Setsuko﻿