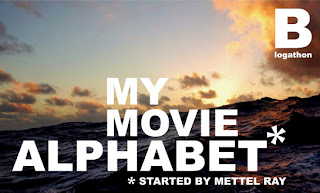 I'm a little late on this one, but after reading so many fabulous lists I just couldn't stop thinking about it. Mettel started this blogathon, click that link to see his blog and other blogs that have participated. I'm no good at graphics, but I figured I'd give it a shot.

American Beauty
My all time favorite movie. Of course it was going to be on this list.
Others: American Psycho, Amy Adams, Aaron Paul.
﻿
﻿
﻿
﻿

Batman
I've been a Batman fan since I was a child, but Christopher Nolan's version made me love it even more. Speaking of which..
Others: Bryan Cranston, Brad Pitt, BASEketball, Black Swan

Christopher Nolan﻿
He is one of my favorite directors today. His films are never boring.
Others: Christian Bale, Carrie

Dreamland
One of my favorite little indies. Whenever I'm browsing my DVDs for something to watch, I always linger on this one.
Others: The Dark Knight, The Dark Knight Rises, Daniel Day-Lewis
﻿
﻿
﻿

Evan Rachel Wood
One of my favorite actresses today. She never turns in a dull performance.
Others: Eastern Promises, Ezra Miller, Emily Browning

﻿
Heath Ledger
One of the greatest actors to ever grace this planet and he left us far too soon.
Others: Harry Potter, Horrible Bosses

"It's a great thing when you realize you still have the ability to surprise yourself."
My favorite line in American Beauty. Actually, it's probably my favorite line ever written in ANY movie.
Others: Inception, The Ice Storm, IMDb
﻿

Kirsten Dunst
She's been one of my favorites since I was a teen. I pretty much wanted to be her when I was younger.
Others: Keira Knightley, Kill Bill vol 1, Kate Winslet
﻿

Lt. Aldo Raine
Of Inglorious Basterds fame. He's in the Killin' Nazi business, and cousin, business is a booming.
Others: Looper, Laura Linney, Liam Neeson, Lord of the Rings

Mysterious Skin
When Stevee wrote her review of Killer Joe, she mentioned having a hard time explaining to people why she would like a movie like that. I have the same issue with Mysterious Skin. This is a damn hard movie to sit through, but the performances are great and I really admire Gregg Araki for taking this on.
Others: Moonrise Kingdom, Michael Fassbender, Me and You and Everyone We Know﻿

The Nightmare Before Christmas
No matter how old I get, I will always love this.
Others: Nikki Reed, (except Twilight) No Country For Old Men, ﻿

"Of course this is happening in your head, Harry, but why on earth should that mean it isn't real?"
This was my favorite line in the Harry Potter films. It's also one of those phrases that I read in the book and immediately thought: "Please let them put this in the movie!" (Along with "Not my daughter you bitch!)
Others: Olivia Thirlby, The Oscars, The Omen
﻿

The Piano
Beautiful score, stunning performances, ok it had a bit too much of naked Harvey Keitel, but hey, I loved this film. Especially for Anna Paquin.
Others: The Perks of Being A Wall Flower, Paqin (Anna!) Pan's Labyrinth﻿

Quentin Tarantino
I wonder what it would be like to be inside this guy's head?
Others: Quiz Show, The Queen﻿

Ricky Bobby
From Talledega Nights, if you're not first, you're last.
Others: Ron Burgundy (from Anchorman) Robert Downey Jr, Rian Johnson, Rorscach (Character from The Watchmen)

Se7en
Lately, Boardwalk Empire has given me a reason to recall the "WHAT'S IN THE BOX!?!?!" scene from Seven. Great film.
Others: Saoirse Ronan, The Social Network, Star Wars
﻿

Teresa Palmer
A wonderful up and coming Aussie actress who I've been a fan of for a long time.
Others: Tom Hiddleston, To Kill A Mockingbird, Tarzan (The Disney one. Seriously)
﻿

Up In The Air
I once watched this movie 4 times in one week. It never gets old.
Others: None - I'm stumped on U.
﻿

Voldemort﻿
He Who Must Not Be Named. You Know Who. Ralph Fiennes was perfectly cast to bring this villain to life in the Harry Potter films.
Others: Vera Farmiga, Viggo Mortensen, Vince Vaughn

"What gear are you in?" "Geeeeaarr??"
This is one of my favorite exchanges in Dogma. I think it's the way that Jay says "Gear."
Others: What's Eating Gilbert Grape, We Need To Talk About Kevin, Watchmen

X-Men 2
There's not a lot going on for the letter X. Luckily X2 is one of the better comic book movies out there. (Yes this picture is horribly blurry. I blame photobucket for not letting me link the picture in its actual size. I had to link the thumbnail)
Others: X-Men
﻿

That Yellow Bastard
This was kind of the catalyst that made me put this list together. I was re-watching Sin City, Nick Stahl was being crazy awesome and I was like "Oh man, I have to do that blogathon and put that Yellow Bastard in there."
Others: Y Tu Mama Tambien

Zombieland
This is always a fun movie for me. I saw it in a theater that served booze to you while you watched it. It was pretty rad.
Others: Zodiac, Zoolander, Zooey Deschanel
﻿
blogathon