Indie Gems: The Heart is Deceitful Above All Things 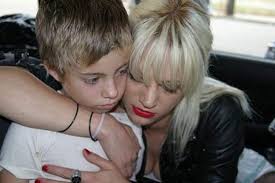 I had an interesting experience with this film. Around the time the movie was coming out, my friend lent me the book. I was researching child abuse cases for a class and this book was supposedly based on the author's life. I remember searching IMDb to see when the film was coming to DVD, then I found out the whole thing was fake. I was kind of disgusted, the things that happen in that book are so outrageous that I thought they just HAD to be real. In fact, the author wasn't even a guy. It was out there, looking back I was a little late on realizing the whole thing was fake.
The story is about Jeremiah (played by Jimmy Bennett as a younger version, then Cole and Dylan Sprouse as a bit older) and his relationship with his mother, Sarah. (Asia Argento) She had him while she was a teen, he was in foster care, then she rips him away from his foster family only to take him into her strange, drugged out world.
This isn't a movie for the faint hearted, and some people even think it's exploitative. I thought of it as incredibly ballsy for Argento (who also wrote the screenplay and directed it) to even go there in the first place. She took a fake story and made it feel as real as it did when I read it. Lots of known actors pop up here and there. Jeremy Renner, Ben Foster, Michael Pitt, Peter Fonda. Hell even Marilyn Manson shows up. The film felt dingy and the editing is sloppy, but that actually works well with the tone. Sarah is pretty fucked up, the movie has to be too. On a side note, I think it's kind of hilarious that the Sprouse Twins, after reaching so much fame threw the Disney Channel will NEVER mention that they were in this film. Like it's an embarrassment. Shame, it's probably the best work they'll ever do. Another fun fact: When this DVD was first released a lot of them (including my own) was missing a key scene. I'll never understand how that happened, but the company that distributed the DVDs gave everyone the correct cut of them film when they mailed their original DVD back. You can also find the missing scene on youtube.
Grade: C+ (Yes, my go to rating in the "that was kind of bad but I liked it" category. Seriously, there's a bit of clay animation in there too.)
Memorable Quote: "If I die..who will watch the walls?" - Jeremiah ﻿
Indie Gems